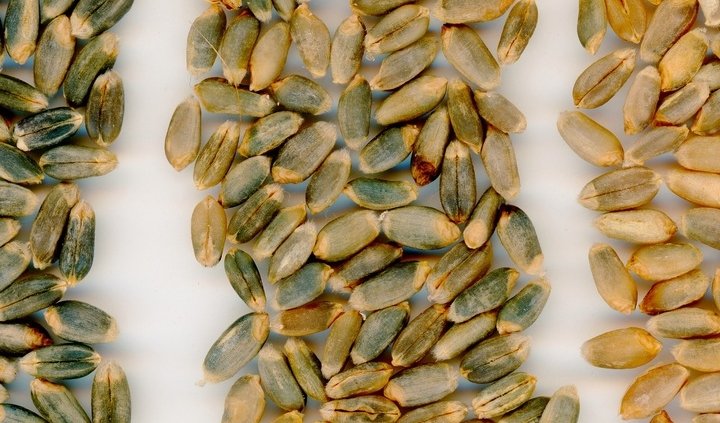 Ask anyone on the street if they can name at least two types of tomatoes, and they’d probably throw out “Roma” and “cherry” without missing a beat. Can they list two different market classes or varieties of wheat? Are there even different varieties of wheat? In a way they’d be correct in thinking that there isn’t much diversity. The reason for this is in large part due to the success of the globalized, industrialized food system. This system is incredibly good at producing large volumes of a crop, aggregating the harvest from many farms at a huge food manufacturing facility, processing that crop into a very consistent end product, and then putting that end product on the plates of millions of people all over the world. While every major food group is a member of this system, from tomatoes to milk, wheat might just be the poster child. Wheat is bread, it’s doughnuts, it’s pasta, it’s pizza, and of course, it’s Wheaties.

There are in fact thousands of varieties of wheat, but only a few are grown by farmers in any given year on large acreages, and then milled into one of just a handful of very uniform end products. As long as a variety yields well and performs consistently during the food manufacturing process, many farmers and millers won’t venture too far beyond thinking about wheat as some combination of red or white, hard or soft. For example, soft white wheat makes pita bread and udon noodles and cookies and vodka. Hard red wheat makes leavened bread. You can also mill any of these classes of wheat into whole wheat flour or white flour.

Public and private wheat improvement programs have primarily focused on developing varieties that yield well and match the requirements of large-scale, industrialized food manufacturers. Think Nabisco cookies, Shock Top hefeweizen beer, and Orowheat sliced bread loaves. I love an oreo and frozen pizza as much as the next person, but to cater to a wider palate and expand on the nutritional value of common foods there is the need for greater diversity in the commerically-available wheat varieties. Currently, it is hard to source varieties that were not developed with the food giants in mind. The artisan baker and craft brewer have to force the dominant varieties to fit their own requirements, and this isn’t good enough.

This was the central story at the Cascadia Grains Conference in Olympia, Washington. Bakers, millers, maltsters, brewers, distillers, and farmers were eager to explore the incredible diversity that can be harnessed in the humble cereal grains. There was talk of the superb baking quality of Red Fife, an old variety that has mostly disappeared from the marketplace, and the “chocolatey” notes discernable in the grain harvested from an organic farm in the Skagit Valley. Farmers were looking for seed of rare, heritage varieties; bakers were looking for identity-preserved flour exhibiting the terroir of a particular region.

And then there were the blue and purple wheats. Researchers at Washington State University’s Bread Lab are developing, using traditional breeding techniques, colored grains that are well-suited to the organic growing conditions of the coastal Pacific Northwest. They’re taking ancient wheat lines from Ethiopia and crossing them with new varieties well-adapted to their cool, wet region. Not only will it look cool, but that purple wheat seed will contain anthocyanins, the same healthy, antioxidant compounds that make blueberries blue. The aim isn’t to create a huge commercial success that will change the color of your kid’s Wheaties. The aim is to create nutritionally superior wheat with excellent baking properties that is easily discernible by its color, and which grows well on organic farms in western Washington. The aim is to offer Washingtonians another delicious option when they go to the store.

Although breeding new varieties isn’t a simple task, this is perhaps the easy part. Across this country, the globalized, industrialized food system has caused the disappearance of many of the local mills, grain dryers, and other infrastructure that is needed to bring a new variety to the local marketplace. So even once a purple wheat variety is released and grown by a farmer, the road from the field to the oven will be an arduous one. That’s why collaboration is the single-most important ingredient in growing the local food system. We need spaces where the farmer can meet with the baker and the crop breeder and the lender and the policymaker. Because not only do we need to grow new crops, but we also need to grow new relationships and a new business ecosystem.